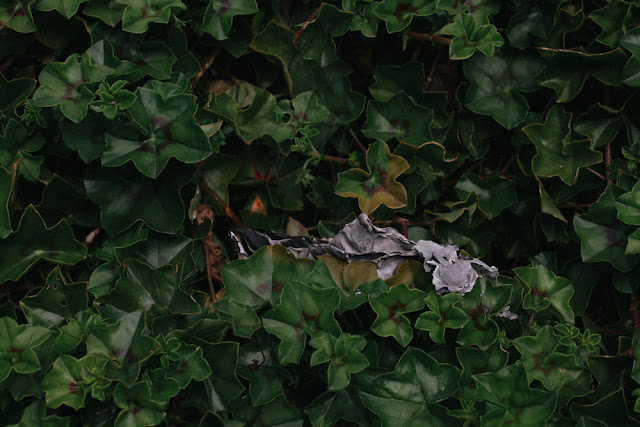 Posted by ilona nelson at 17:16 No comments:

Email ThisBlogThis!Share to TwitterShare to FacebookShare to Pinterest
Labels: ilona nelson, the lines 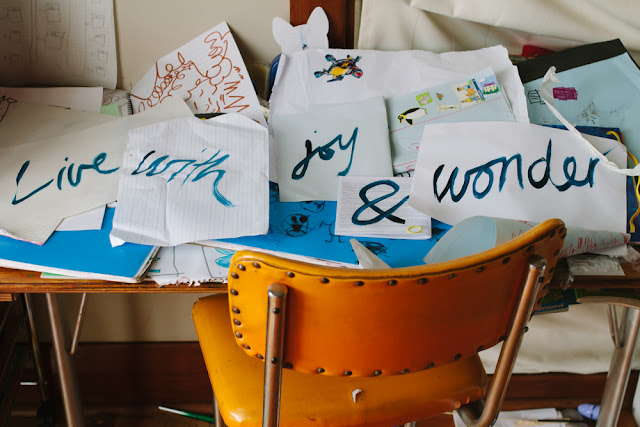 Posted by ilona nelson at 14:31 No comments:

At the beginning of the year I was invited to create work for a new community space in Altona Meadows called Orbital which is run by Hobsons Bay City Council.  Heather van Heerwaarden curated the show and I was joined by Naomi Nicholls and Larissa MacFarlane who are fellow onefourfour-ers!  The exhibition space consists of 6 lightboxes so we had 2 each to make site specific work for.

I decided to create the work in Altona Meadows and photograph my response to the environment.  Well, my 7yo pressed the shutter for me and we spent a lot of time taking photos of him jumping and running towards the camera......  He's obsessed with stop-motion animation! 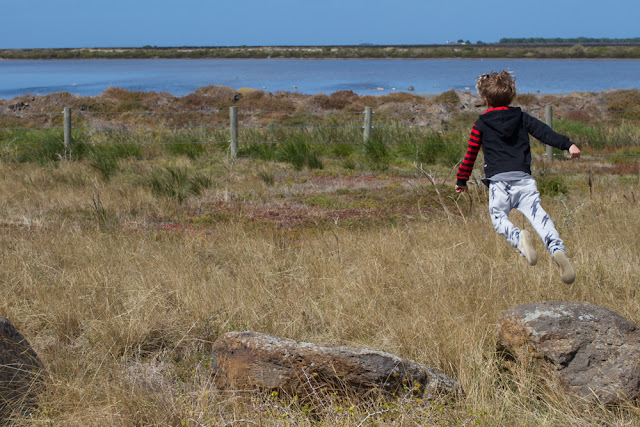 The weather was pretty crazy that day, when we got there it was thick cloud and the light was dark and almost foggy which was great for me!  But by the time we wandered around for ages trying to decide on two perfect spots the bright midday sun came out shining.  I'm always happy to work with the elements so we carried on.

The first image we shot was some rocks amongst the grass with the city in the background.  I really wanted to do something different for this exhibition and I had planned to show this image as a series of four scrolls that fit together.  In the end I used four different images which I printed, rolled into scrolls and lined up to expose different parts of each image. 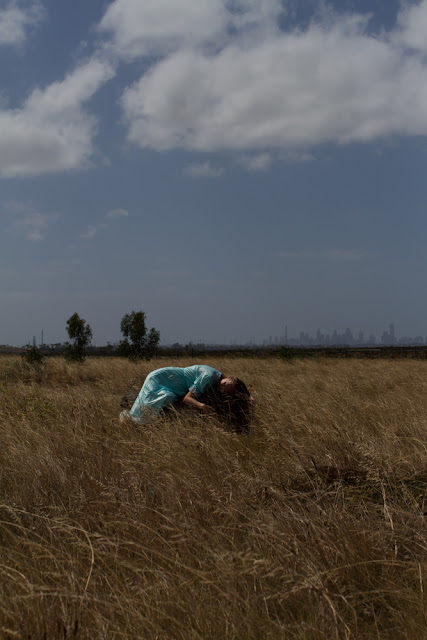 We then shot the following image and the plan for this one was to sew gumleaves from the dress with all the cotton exposed, I absolutely love sewing into photographs and want to do more of it but haven't had the time to just play and experiment. 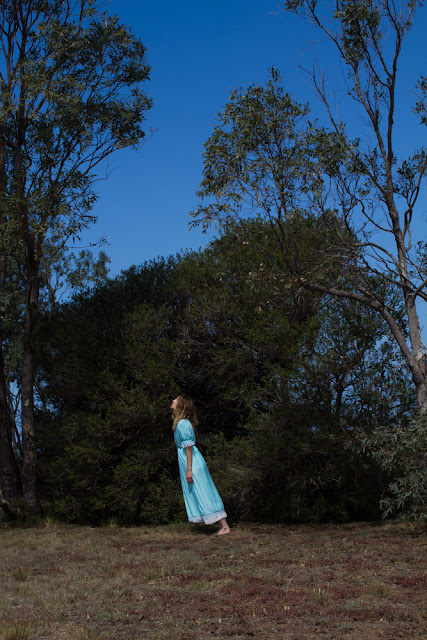 It was an interesting process creating work for a particular size and trying something new, I forgot what it's like to get out of my comfort zone!  That's never good, I have a bunch of ideas I want to try and need to make more time for being uncomfortable in my work.

We had our photo taken with the mayor one night and I super quickly (had the boys with me causing a ruckus) took some photos of the work all lit up and it looks great.  The work will be there until August so if you happen to be visiting Aldi's in Altona Meadows.... 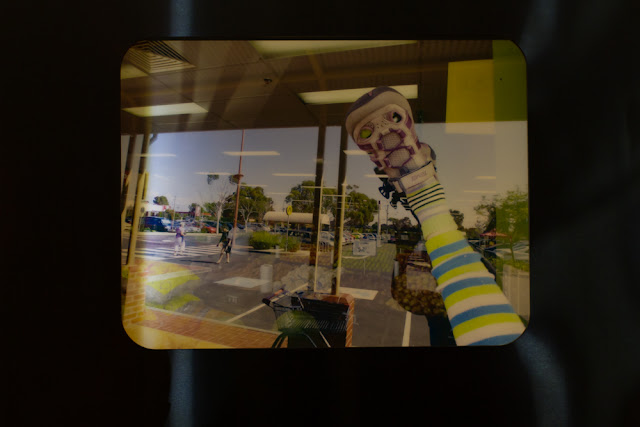 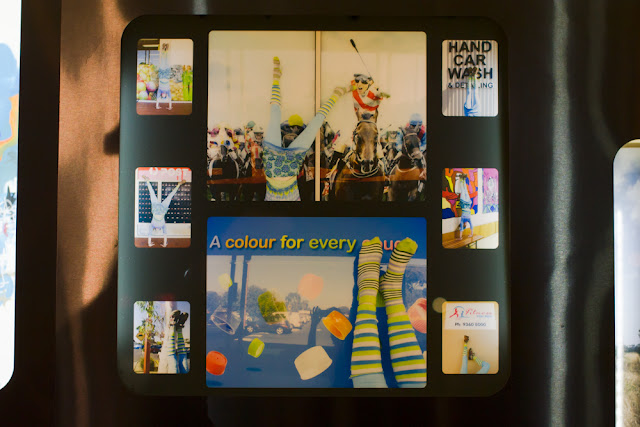 Larissa staged handstands all over Altona Meadows and documented the process... 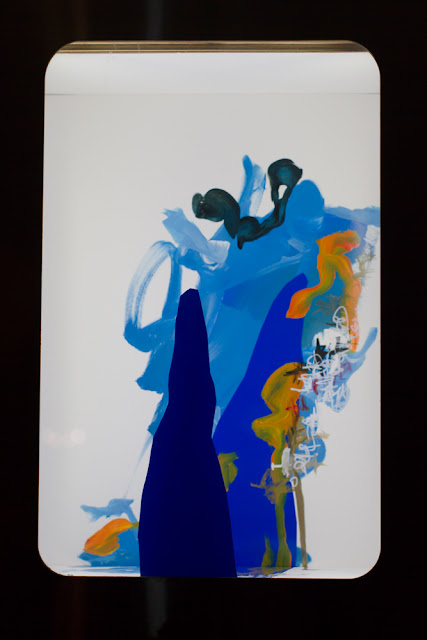 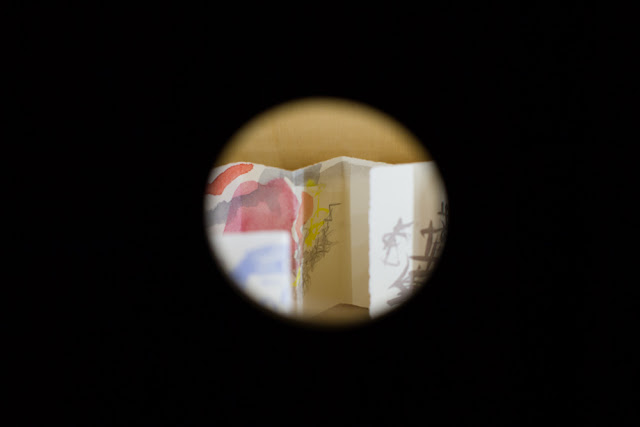 Naomi created a site specific installation for one of the lightboxes and some teeny tiny art books for the peep hole... 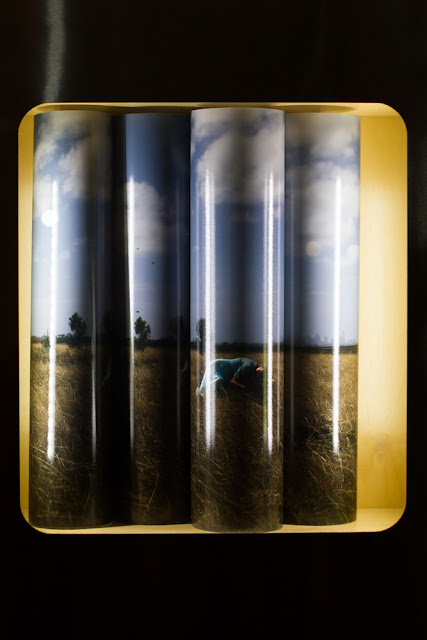 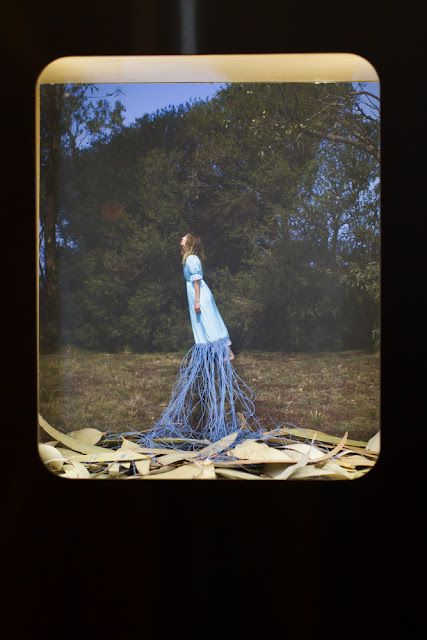 And here's how mine turned out, I think I'd like to print the leaning one full frame and sew the leaves on again and get it framed.  I really do love the sewing, or adding other mediums to make the photo more than a straight print.  Just like how I love to create installations when I'm exhibiting work so it's not just a line of photos on the wall.  Maybe I want to make my work a fuller experience?  That's not quite the right word I'm looking for, fuller experience sounds a bit arrogant or something...

Anyhoo I want to say a HUGE thank you to Hobsons Bay City Council for supporting the arts, they've commissioned me for a variety of things over the years and I really appreciate it.  Thanks to Heather for curating the show and giving us free reign on what we wanted to create.  It's been awesome.
Posted by ilona nelson at 12:45 No comments:

sharing embarrassing mistakes with Artshub. and their huge audience. 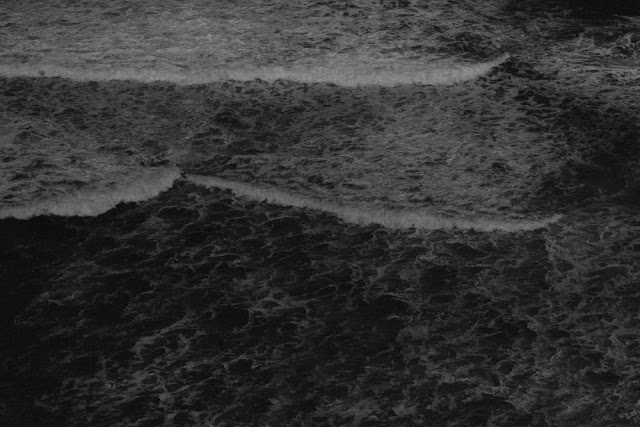 The lovely Madeline Dore from Artshub phoned me for a quick interview about what it's like to host an exhibition.  I happily shared some of my embarrassing mistakes (a select few, I have plenty more in the bank) and I hope people learn what NOT to do from me!

I also spoke about The White Cube ebook I'm writing which is a how-to on hosting exhibitions!  I've been working on it in fits and starts over the last few years in between deadlines but now that I've publicly declared what I'm doing it's great motivation to get it finished :)  Join my mailing list for future announcements here.

And you can read the Artshub article here. 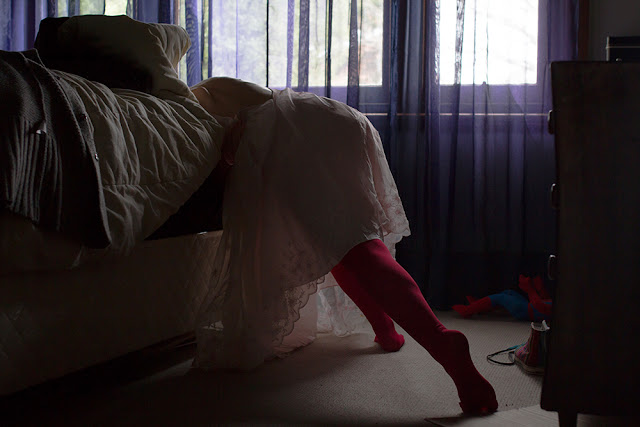 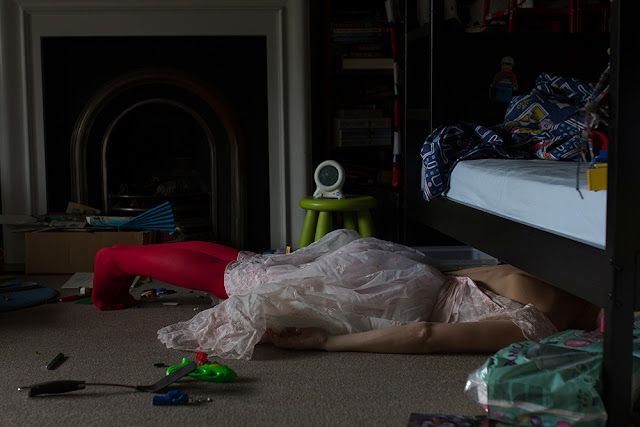 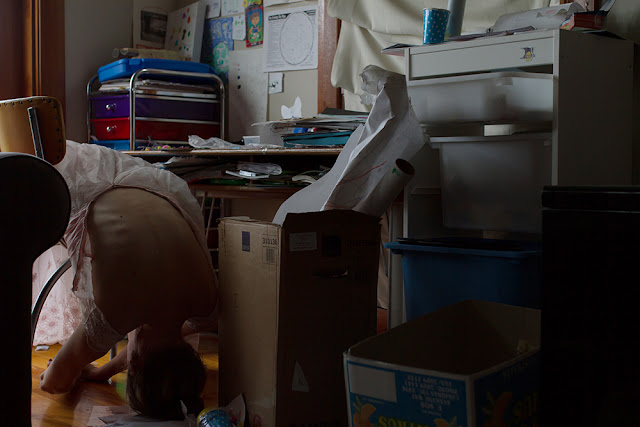 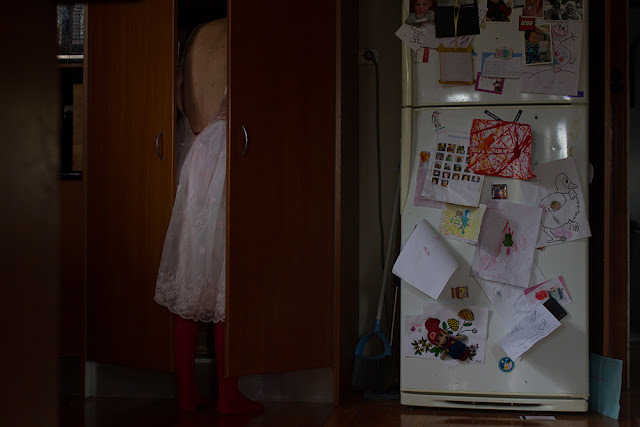 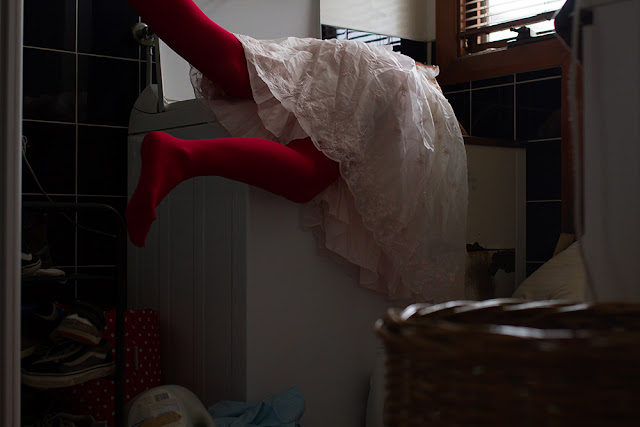 Posted by ilona nelson at 20:39 No comments: 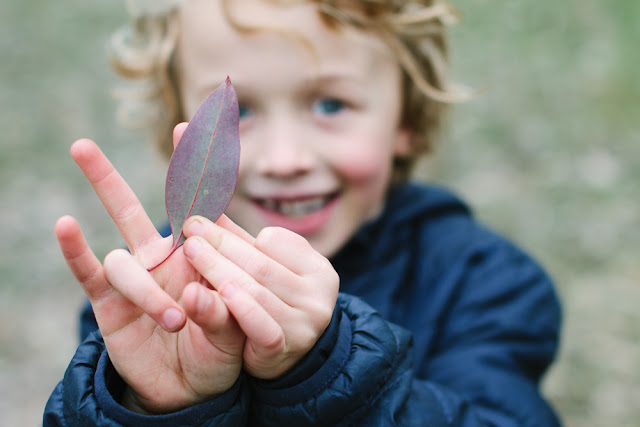 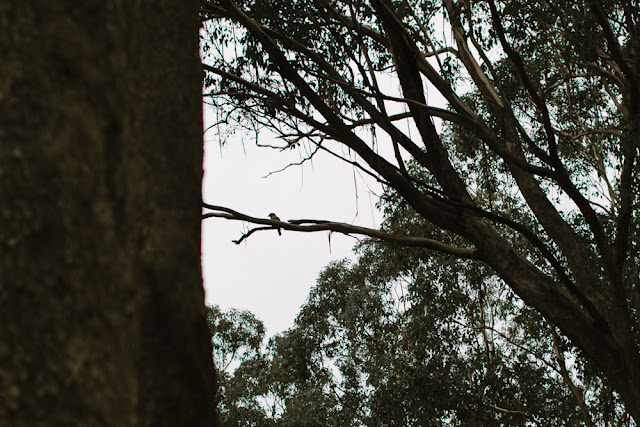 Another failed visitingthebushtoshootnewwork trip but we did find this BEAUTIFUL gum leaf, in fact I found a branch that had fallen off another tree which I was going to drag back to Melbourne in the car but it didn't fit.  It was so pretty.  We also had a visit from a kookaburra which transported me back to my childhood, listening to their laugh was my normal background noise when I was growing up.  I miss opening the door and walking straight into the bush, looking out the windows at gum trees, the smell of the bush when it's raining and the songs of the birds free to be where they please...

Last night I dreamt I saw some pink galahs up a tree and I quietly sat on the ground to watch them, it was so peaceful... until some guy starting to chase me and I had to run off.  What a meanie.

Posted by ilona nelson at 16:27 No comments: 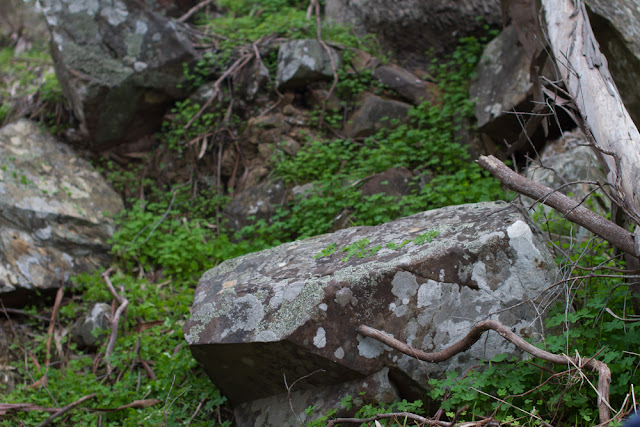 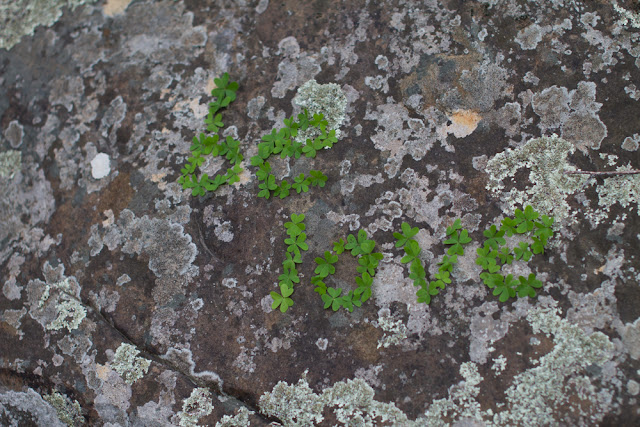 Posted by ilona nelson at 16:14 No comments: 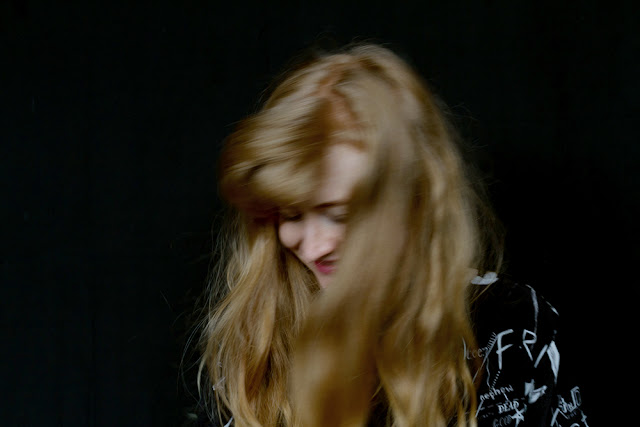 I'm so excited to have finished the This Wild Song website and it's now live!  There's a list of the artists involved with the first few interviews, plus you can join the This Wild Song mailing list to be notified when a new artist is featured on the site!

This is my portrait of Nell and you can read my interview with her here.  I'll write a Behind The Scenes post about my shoot with her soon! x

Ps. I now have an instagram account dedicated to the artists of This Wild Song at @thiswildsong
Posted by ilona nelson at 16:00 No comments:

'I guess you could say my style is my inability to do it any other way.' Anton Corbijn
Posted by ilona nelson at 22:43 No comments: 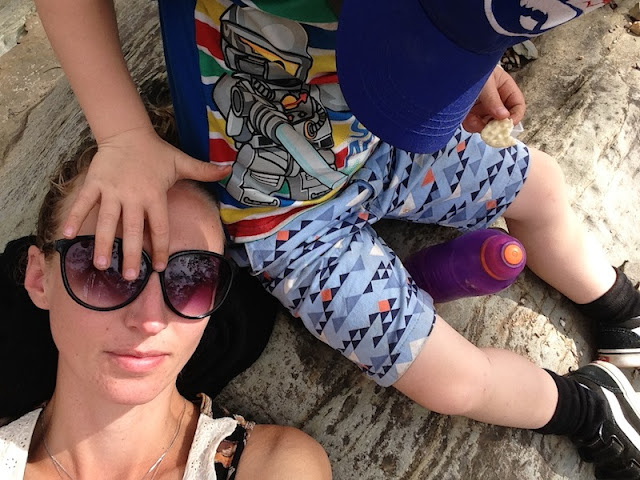 I've always loved returning to where I grew up in the bush outside of Bendigo, the kids get to throw sticks and rocks and run wild without me having to make sure they don't run on the road or tell them off.  Plus I usually get to shoot some photos just for me, just for fun.  But unfortunately the last 3 trips haven't been fruitful...

The pic above is of my youngest patting me to sleep in my creek bed.  The creek was completely dry and I found the perfect grooves to nestle in and it was absolute bliss, I totally could've had a nap, literally two minutes later - cue crying, someone's got something in their eye and we have to go.  We try again later then the other one gets something in his eye and screams the place down so we have to go. 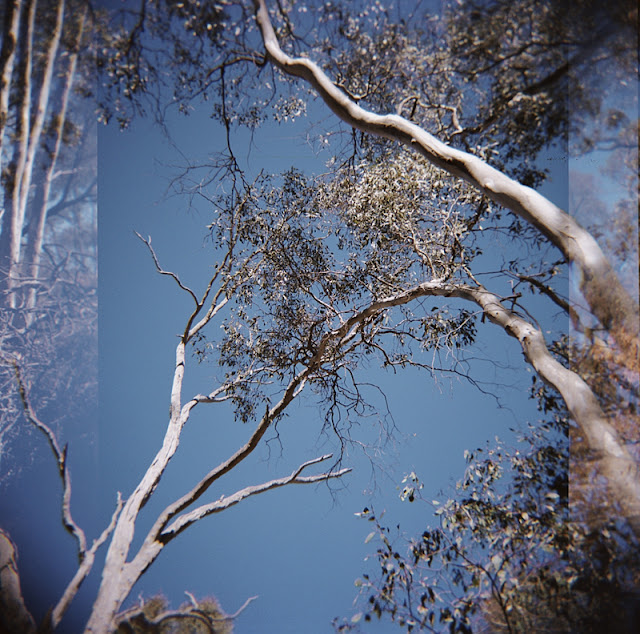 Another day I do manage to get a photo done with them which was the media pic for a friend's theater production.  I spot a couple of great locations and return the next day to shoot some stuff while the boys play. 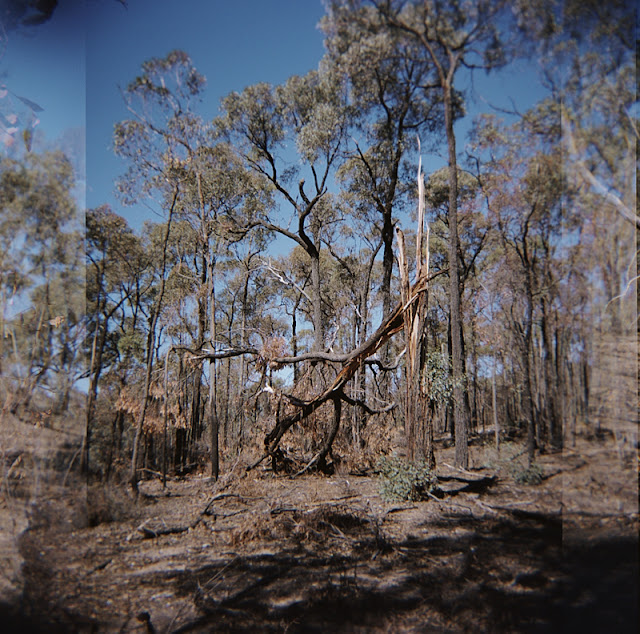 We get out there and I'm dancing around forever and just can't get the right composition, it's not happening.  The boys are throwing sticks into the creek and one of them accidentally throws my remote in as well.  No pictures are going to be made today. 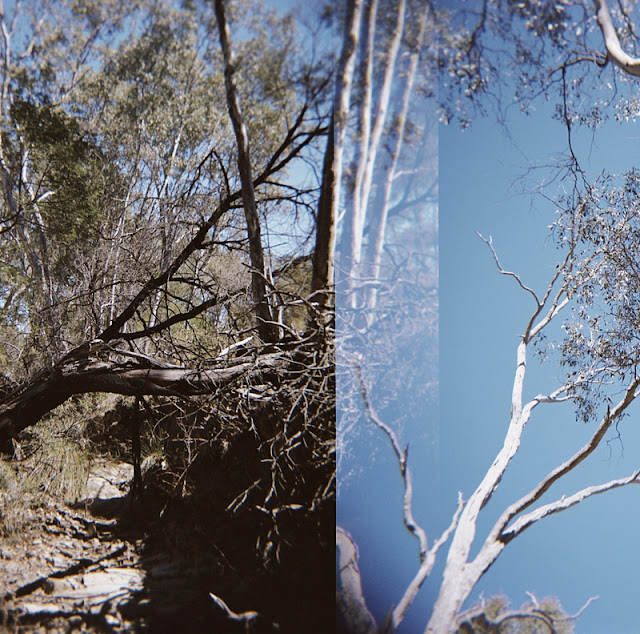 Another day we return to the dry creek bed yet again and I'm trying to make something out of a great location in the blazing midday sun, I wanted to get out there in the morning for the nice light but it takes some serious tantrums before my youngest agrees to get in the car...  I do actually shoot some stuff and all I manage to get out of it is this; 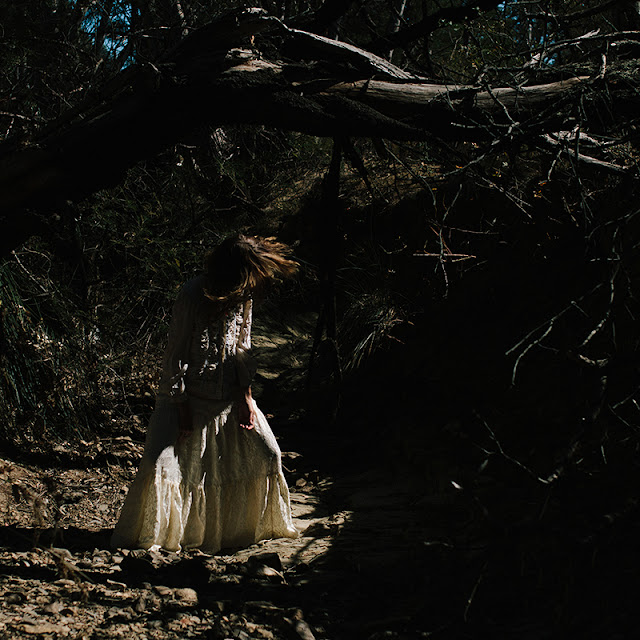 Which I don't mind, it's got some grunt which is the kind of work I want to make more of.  More grunt and grit, less pretty. 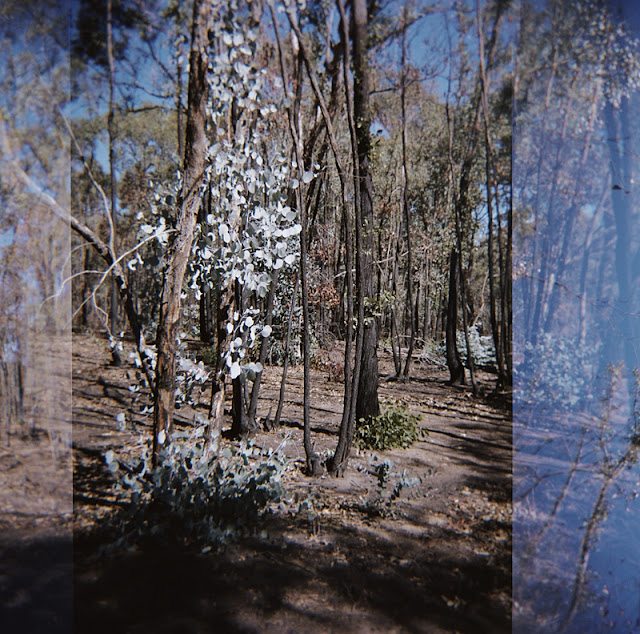 On the same day we return yet again to the forest where there's been controlled fires and the trees are regrowing and it's so beautiful, the black with the silver blue hues.  LOVE.  I dance around for a bit, pick my spot, take out my tripod aaaaaand - someone needs the toilet so we have to go. 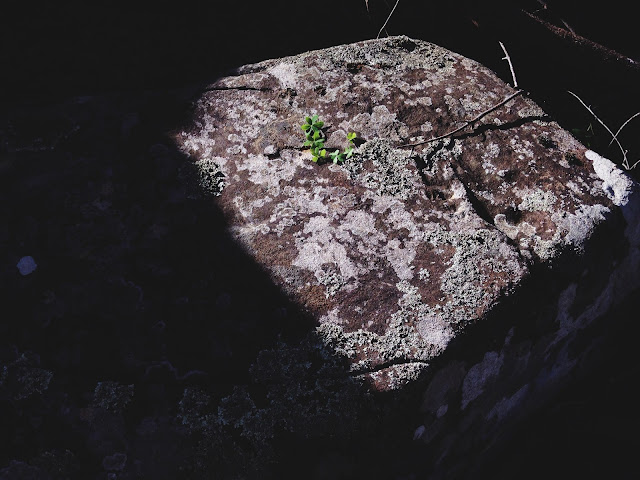 Which brings us to today.  It's my last bush trip before my op so I probably won't be back for a few months.  And of course I have a million ideas I want to get out, especially as I won't be able to use my arms for a while, so the pressure is on.  My youngest was up from the wee hours so we're all tired, it's a crazy wintery day but the sun breaks in the afternoon so out to the bush we go!  The boys finally go into their own world and are happily playing a game they've made up, I've found a perch on a beautiful big rock jutting out of the land in the sunshine.  Today I was starting small, my aim was to make two text based photos from some messages popping up in meditation.  This was as far as I got as one of the kids managed to slip into the only puddle of water in the creek bed and get completely drenched on a 10c day!  So we had to go.

My plan for this year was to do less paid more and more of my work as my ideas list is getting out of control, I just want to bunker down and MAKE.  And somehow life is still insanely busy like last year, I'm forever rushing and I need it to STOP.  There's so much to do before my surgery in 2 weeks - getting my paid work up to date, making sure onefourfour still runs while I'm out of action, cooking and baking my head off so I have a stash of vegan food ready for when I get home from hospital, making sure the kids are sorted, and OH LORDY does the house need a serious declutter and clean.  Did I mention it's school holidays?  Oh yea, and my arts practice.  That need some attention too.

Anyhoo what is the point of this ramble?  Is the universe putting up barriers to teach me something?  To remind me how much I need my practice?  Or do I just need some child free time?!  I'm not really sure.  I'm tired.  I'll definitely be doing some serious planning while I'm sitting around recovering, I see it as a chance to evaluate how I've been existing and how I want to start living.  Post surgery will see my practice go from the bottom to the top of the ladder that's for sure. 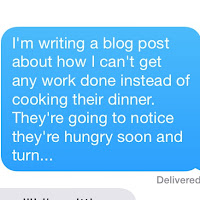 I've also been text-whinging while writing this.  Apparently multitasking is bad so I better stop that too.  Onwards and upwards my friends!! xx

Oh and I bought a new remote today.
Posted by ilona nelson at 17:31 No comments: